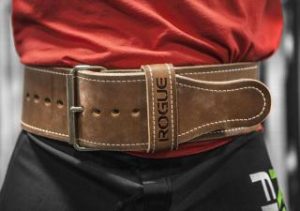 The use of a lifting belt divides coaches and athletes. The easiest response is often given. ‘Wear it sometimes but not always’. And although this may be technically correct, it doesn’t really help us.

So to explore this issue further, we review the research, and then make some comments of our own based on the findings.

In 2006, Kingma et. al. extended this research in their paper “Effect of a Stiff Lifting Belt on Spine Compression During Lifting”. Of note, were their findings that in weightlifters, “…the belt reduced compression forces by about 10%, but only when inhaling before lifting”. This adds weight to the argument that wearing a belt can protect spinal health, but also to the fact that a valsalva manoeuvre (an inhalation causing an increase in intrabdominal pressure) is important, and a belt may offer a physical cue to push against to encourage this. The conclusion was that “Wearing a tight and stiff back belt while inhaling before lifting reduces spine loading.”

In 1995, Ciriello and Snook explored the impacts of belts of preserving muscle function, in a paper titled “The effect of back belts on lumbar muscle fatigue.” They used electromyography to measure the fatigue in the back extensors in extended bouts of lifting both with and without a belt. They came to the conclusion that “There were no significant differences in maximum isokinetic endurance and electromyographic spectral parameters of the back extensor muscles as a result of wearing a back belt during heavy lifting and lowering tasks.”

Lavendar et. al. explored a different variable in 2000 which may give us some insight into the sue of belts in more dynamic movements like Olympic weightlifting. Their study, “Effects of a Lifting Belt on Spine Moments and Muscle Recruitments After Unexpected Sudden Loading” looked at muscle activation patterns when a load was applied without warning. Relevant to the receiving position of the clean and snatch, their finding revealed that “The belt reduced the forward bending of the spine during the symmetric loadings. In the men, the belt also reduced the forward flexion moment acting on the spine.”. This indicates the belt may be useful when a bar is received in an unexpected position forward of the athlete’s base of support (feet) in a weightlifting receiving position. The use of a belt could help them resist this unexpected loading and recover the lift.

Perhaps the most powerful piece of evidence in favour of the use of a belt comes from research entitled “Effects of the abdominal belt on muscle-generated spinal stability and L4/L5 joint compression force” in 2002 by Ivancic et. al. This addresses what is perhaps the biggest argument against using a belt, that it somehow acts as a crutch, and that it means the lifter doesn’t have to learn correct muscle activation patterns. This would imply that lifting with a belt damages the ability to lift without a belt. The conclusion of this research indicated that “The effective stability of the spine was adequately predicted by the active spine stability and the effect of the belt, which accounted for approximately 34% of the effective spine stability. The study demonstrated that the abdominal belt contributed to the passive stability of the lumbar spine and did not change the active stability for tests performed within the same experimental session.”. The implications here are considerable, with the research suggesting the belt assists with the lift, but does not in any way reduce the level of muscle activity or the patterns of muscle activity during this lift. The study supports the use of belts, with all the proposed upside, and non of the proposed downside.

Based on this 2002 research, we can make the claim that there is no downside to wearing a belt, only upside, and that the claim that a belt acts as a crutch has no scientific basis, at least in this study.