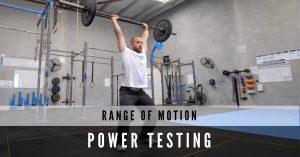 ​At Range of Motion, we use a battery of four tests to test power. We define power as the amount of work that can be done in a certain time – it is a product of both strength and speed. When measuring power, we’re measuring the individual’s ability to move weight, quickly. Having more power has a raft of health and fitness benefits for the general population and athletes alike.

We use the following tests, which offer a comprehensive snapshot of power across various movement patterns. All tests can be completed in the same session if desired.

Result to record: Highest score over the three attempts.

Procedure (view a video description of this test):

Result to record: Highest score over the three attempts.