The Complete Guide to Training Power for Health and Performance

Specific training to improve power has far-reaching benefits for a broad spectrum of sub-populations.
But first, let’s define the term. In physics terms, power = force x distance / time. We can simplify this equation by saying that power is the ability to move a large load, a long distance, quickly. Whereas absolute strength doesn’t take speed into consideration, power does. A powerful person is not just strong, but fast too.
For performance-based athletes, the benefits of having more power are obvious. A more powerful sprinter will run faster. A more powerful boxer will punch harder. A more powerful contact-sport athlete will tackle harder. A more powerful thrower will throw further.
The benefits for a ’non-competitive’ general population are less obvious but no less important. Aside from an improved ability to complete ‘power-based’ activities of daily living (such as loading heavy items onto a high shelf or moving quickly to stop a child or dog walking into traffic), the benefits of power are considerable as we age.
It’s widely demonstrated by the research that strength declines with age, but what isn’t as widely known is that power exceeds the rate of strength loss. As we age, we lose power faster than we lose strength. There is a faster decline (called ‘preferential atrophy’) of our faster twitch ’type two’ muscle fibres than there is our more ’slow twitch’ ’type one’ muscle fibres. And power may actually be more important than strength later in life, as it’s a stronger predictor of fall risk and functional decline. If you think about it, recovering from a trip (before it becomes a fall) requires speed, not just strength. Power protects long-term health.
For both performance-based athletes and a health-based general population, power training increases the proportion and effectiveness of fast twitch muscle fibres.
There are a few key principles we need to take in to account when looking to build power:
The stretch-shorten cycle:
To maximise power, we should take advantage of a phenomenon called the ’stretch-shorten’ cycle. This is where we ‘load’ up our muscles and tendons before we immediately and rapidly contract them to create powerful, explosive movement (like pulling back an elastic band then immediately letting it go to fling it across a room). This cycle is maximised when the initial ’stretch’ has a small amplitude but a high velocity (so there’s no delay between the stretch and shorten phases). As well as increasing force and power, this also improves the neural connection between the nervous system and the muscles and the speed of the stretch-shorten reflex.
Speed and acceleration continue to the end of range:
In many traditional ’strength based’ exercises (where movement speed, and therefore, power, are not prioritised), there is a ’slowing’ or ‘deceleration’ at the end of a repetition. Picture a squat. Once you’ve got through the hard part of the squat (the ’sticking point’), you just rely on momentum to lock out the repetition. The same on a bench press, where you slow down the bar as you’re about to lock your arms. In sports term, throwing a strong punch that slows down as it’s about to contact your opponent will be low power, and therefore, ineffective. In power training, the aim is to continue to accelerate through the end of range.
There are several methodologies we have to improve power, and to understand them, it’s important to understand the ‘force-velocity curve’. This is a curve that plots force (strength) versus velocity (speed). There is an inverse relationship between force and velocity. So movements that are very high force are very low velocity (like a very heavy deadlift). And movements that are very high velocity are very low force (like sprinting). Because power is a product of both force and velocity, it is important that we optimise speed and strength to maximise force. 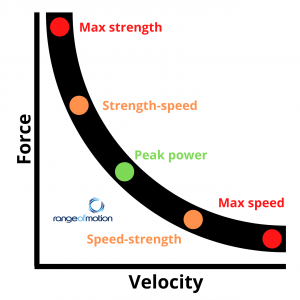 There are five points on the force-velocity curve, and all are important in training to maximise power.
Max Strength: Very high loads (90-100% of one rep max). Includes movements like powerlifting exercises (squat, deadlift, bench press). These exercises are not great for improving power (due to the low speeds), but completing them at lighter loads (around 60% of a one rep max) will maximise their power-generating effect. If looking to use these movements as a power training tool, it should also be noted that the speed and acceleration must continue to the end of range.
Strength-Speed: High loads with increased velocity (highest levels of power occur here at 80-90% of one rep max). Includes Olympic weightlifting. Strength is still prioritised over speed, though the speed is greater than it would be in the ‘max strength’ exercises (and hence the force will be lower).
Peak Power: Moderate loads at high speed (30-80% of one rep max). Elements of the ’second pull’ of Olympic weightlifting (like hang power cleans), loaded jumps (jumps with weight added), weighted sprints (like sled sprints or prowler push sprints) and ballistic moderate-weighted throws. For these movement, ‘peak power’ will occur around 30-40% of one rep maxes. This section of the force-velocity curve produces the greatest amount of force in the least amount of time. It is also the section that results in the highest rate of force development (RFD) – how fast the individual can develop force.
Speed-Strength: Low load, high speed (30-60% of one rep max). Plyometric movements with a slow stretch-shorten cycle like a max height vertical jump (also called a counter-movement jump) which begins with the individual in a standing position. ‘Jump training’ is an example of a slow stretch-shorten cycle, where there is a stretch-shorten cycle but no repetitive ground contact. Although the muscular is still rapidly stretched and contracted, a slower stretch-shorten cycle is not a ’true plyometric’ movement.
Max Velocity: Very low load, very high speed (<30% of one rep max). Plyometric movements with a fast stretch-shorten cycle like sprinting, depth jumps and hops. These are examples of ’true plyometric’ movements, where (in the example of hops) the time that the feet in in contact with the group is very short, and there is a repetitive ground contact.
The aim of power training:
The aim of training to increase power is to move the entire force-velocity curve to the right. That is, increase the movement speed for any given load. However, if we only train one of the five aspects of the curve, the law of specificity tells us we will only improve that element. Not only will that be the only element that improves, but the other elements are likely to be compromised (reduced).
If only max strength is trained, maximum velocity will be damaged, and if a training program includes only maximum velocity training, max strength will decrease.
Training all parts of the curve is called ’surfing the curve’ and is the most effective method of training power.
Programming and prescription guidelines:
Post- activation potentiation:
When programming an exercise session to increase power, the order in which exercises are completed is important. In a principle known as ‘post- activation potentiation’ (PAP), a small set (2-3 repetitions) of a heavy strength movement is followed immediately by a higher velocity exercise (from the peak power, speed-strength or max velocity groups) with a similar movement pattern (called a ’synchronised activity’). For example, two heavy back squats might be followed by a set of max height vertical jumps. Heavy bench press may be followed by plyometric push-ups or medicine ball throws. And heavy deadlifts would be followed by broad jumps.
This technique works as a result of the heavy movement ‘exciting’ the fast twitch muscle fibres. They are then able to generate more power in this new ‘heightened’ state. PAP may also work due to increase nerve conduction speed, more synchronised motor unit (the nerve and the muscle fibre it innervates) firing, reduced inhibition from the Golgi tendon organ, reduced co-contraction (reciprocal inhibition), and reduced inhibition in the central nervous system.
As a result of this concept of PAP, there are two approaches to exercise ordering. The Russian Speed-Strength method alternates between high force loads and high velocity loads to increase power. The Bulgarian Speed-Strength method involves progressively working from max strength, through strength-speed, peak power, speed-strength and finally max velocity.
Set size and recovery length:
As soon as movement speed begins to decrease as a result of fatigue, the effectiveness of these exercises as power-training tools is compromised. As such, the repetitions per set should be kept at six or less.
Power training also requires maximum recovery between sets to maintain this movement speed. A work to rest ratio of 1:10 (rest between sets for ten times as long as the set took to complete) should offer full recovery. This will also allow recovery of the phospho-creatine energy system to ensure energy delivery for these explosive movements.
Loads:
To maximise the power outputs in different section of the force-velocity curve, different loads are required. For peak power, Olympic lifting should be completed at 80-90% of one rep maxes, 40-60% for powerlifting movements, and 30-40% for loaded jumps and throws.